Archibald Philip Primrose, 5th Earl of Rosebery, 1st Earl of Midlothian, KG, KT, PC, FRS, FBA (7 May 1847 – 21 May 1929) was a British Liberal politician who served as Prime Minister of the United Kingdom from March 1894 to June 1895. Between the death of his father, in 1851, and the death of his grandfather, the 4th Earl of Rosebery, in 1868 he was known by the courtesy title of Lord Dalmeny.
Rosebery first came to national attention in 1879 by sponsoring the successful Midlothian campaign of William Ewart Gladstone. He briefly was in charge of Scottish affairs. His most successful performance in office came as chairman of the London County Council in 1889. He entered the cabinet in 1885 and served twice as foreign minister, paying special attention to French and German affairs. He succeeded Gladstone as prime minister and leader of the Liberal Party in 1894; the Liberals lost the 1895 election. He resigned the party leadership in 1896 and never again held political office.
Rosebery was widely known as a brilliant orator, an outstanding sportsman and marksman, a writer and historian, connoisseur and collector. All of these activities attracted him more than politics, which grew boring and unattractive. Furthermore, he drifted to the right of the Liberal party and became a bitter critic of its policies. Winston Churchill, observing that he never adapted to democratic electoral competition, quipped: “He would not stoop; he did not conquer.″

Rosebery was a Liberal Imperialist who favoured strong national defence and imperialism abroad and social reform at home, while being solidly anti-socialist. Historians judge him a failure as foreign minister and as prime minister.
At Eton, Rosebery notably attacked Charles I of England for his despotism, and went on to praise his Whig forebears – his ancestor, James Stanhope, 1st Earl Stanhope, was a minister to George I of Great Britain. Benjamin Disraeli often met with Rosebery in the 1870s to try to recruit him for his party, but this proved futile. Disraeli’s major rival, William Ewart Gladstone, also pursued Rosebery, with considerable success.

As part of the Liberal plan to get Gladstone to be MP for Midlothian, Rosebery sponsored and largely ran the Midlothian Campaign of 1879. He based this on what he had observed in elections in the United States. Gladstone spoke from open-deck trains, and gathered mass support. In 1880, he was duly elected Member for Midlothian and returned to the premiership.

Rosebery served as Foreign Secretary in Gladstone’s brief third ministry in 1886. He served as the first chairman of the London County Council, set up by the Conservatives in 1889. Rosebery Avenue in Clerkenwell is named after him. He served as President of the first day of the 1890 Co-operative Congress. Rosebery’s second period as Foreign Secretary, 1892–1894, predominantly involved quarrels with France over Uganda. To quote his hero Napoleon, Rosebery thought that “the Master of Egypt is the Master of India”; thus he pursued the policy of expansion in Africa.
Rosebery helped Gladstone’s Second Home Rule Bill in the House of Lords; nevertheless it was defeated overwhelmingly in the autumn of 1893. The first bill had been defeated in the House of Commons in 1886.
Rosebery became a leader of the Liberal Imperialist faction of the Liberal Party and when Gladstone retired, in 1894, Rosebery succeeded him as Prime Minister, much to the disgust of Sir William Harcourt, the Chancellor of the Exchequer and leader of the more left-wing Liberals. Rosebery’s selection was largely because Queen Victoria disliked most of the other leading Liberals. Rosebery was in the Lords, but Harcourt controlled the Commons, where he often undercut the prime minister. Rosebery was the only one of the ten Prime Ministers to serve during Queen Victoria’s reign who was born after her accession to the throne in 1837.

Rosebery’s government was largely unsuccessful, as in the Armenian crisis of 1895-96. He spoke out for a strongly pro-Armenian and anti-Turkish policy. Gladstone, a prime minister in retirement, called on Britain to intervene alone. The added pressure weakened Rosebery.

His designs in foreign policy, such as expansion of the fleet, were defeated by disagreements within the Liberal Party. He angered all the European powers. The Unionist-dominated House of Lords stopped the whole of the Liberals’ domestic legislation. The strongest figure in the cabinet was Rosebery’s rival, Harcourt.[citation needed] He and his son Lewis were perennial critics of Rosebery’s policies. There were two future prime ministers in the Cabinet, Home Secretary H. H. Asquith, and Secretary of State for War Henry Campbell-Bannerman. Rosebery rapidly lost interest in running the government. In the last year of his premiership, he was increasingly haggard: he suffered insomnia due to the continual dissension in his Cabinet.

On 21 June 1895, the government lost a vote in committee on army supply by just seven votes. While this might have been treated merely as a vote of no confidence in Secretary for War Campbell-Bannerman, Rosebery chose to treat it as a vote of censure on his government. On 22 June, he and his ministers tendered their resignations to the Queen, who invited the Unionist leader, Lord Salisbury, to form a government. The following month, the Unionists won a crushing victory in the 1895 general election, and held power for ten years (1895–1905) under Salisbury and Arthur Balfour. Rosebery remained the Liberal leader for another year, then permanently retired from politics. (Wikipedia) 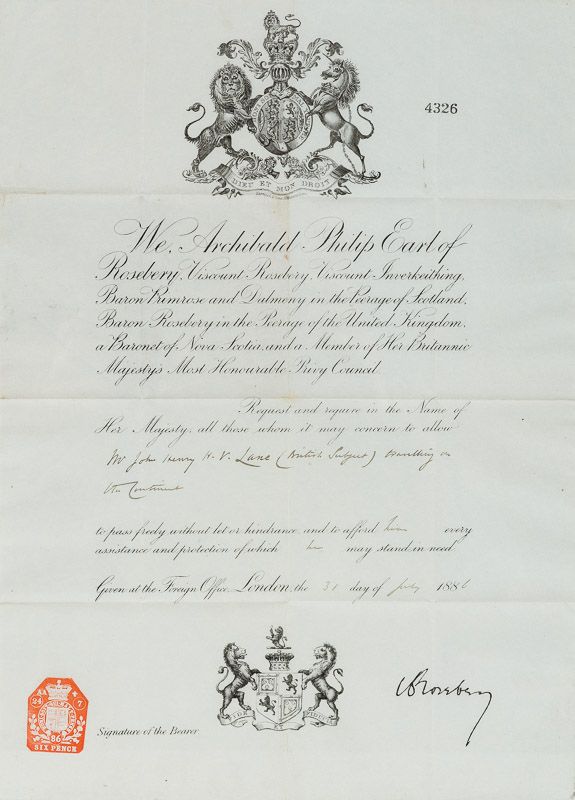